The Vandalism of the Delhi Police; Grim Human Rights Violation at Batla House 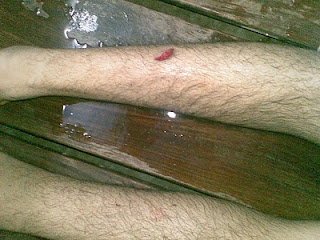 The NHRC has released the documents which formed the basis of its conclusion that the Batla House ‘encounter’ was genuine. The post mortem reports of the slain young men, Atif Ameen and Md. Sajid, as well as Inspector Sharma have been made public for the first time. Thus far, the Delhi Police and AIIMS (which conducted the post mortem) have declined to provide information citing 8 (1) b and 8 (1) h of the RTI Act. Section 8(1) b of the Right To Information Act–2005 states that information which has been expressly forbidden to be published by any court of law or tribunal or the disclosure of which may constitute contempt of court cannot be provided to a RTI petitioner. Section 8(1) h states that information cannot be provided about matters which would impede the process of investigation or apprehension or prosecution of the offenders. It should be noted that when the RTI was filed the first time by RTI activist and Jamia student Afroze Alam Sahil, a few days after the ‘encounter’, there was no direction from the court that such information be withheld. Indeed, frustrated by the Police’s refusal to part with the post mortem report, the Central Information Commission directed the Delhi Police to submit all documents pertaining to the Batla House Encounter before it by March 5, 2009 for inspection by the bench" so that it could examine whether the information cold be made public. The Delhi Police instead rushed to the High Court, challenging this directive, feigning that such information would be detrimental to investigations. The High Court stayed the CIC directive on 1st April 2009.
Meanwhile, the NHRC in its ‘enquiry’, extensively cited the postmortem report of Inspector Sharma to prove that he had been fired upon by alleged terrorists. While wounds suffered by the slain police officer were provided with great detail such as the places in the body where bullet injuries were found, their impact, ‘entry and exit points’ etc. Even the injury suffered in the arm by injured Constable Balwant Singh carried all this information but the same treatment is curiously absent in the case of Atif and Sajid, the slain ‘terrorists’. This is surely intriguing because the post mortem report mentions quite clearly that:
1)      Atif Ameen sustained injuries on right knee cap (injury number 7); grazing effects in the interscapular region or back region in layperson’s terms (injury number 11),  multiple abrasions on right buttock (injury number 21). See attached photo of Atif’s back and leg which clearly illustrate these injuries.
It is further explicitly stated that injury number 7 was "produced by blunt force impact by object or surface.”
The gun shot injuries received by Atif are as follows:
Gun shot Wounds (Entry) on the Body of Atif Ameen 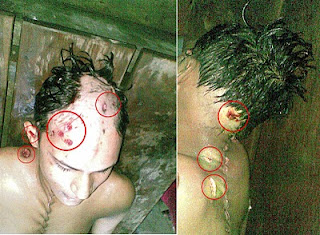 ·     Almost  (8 out of 10) all the entry wounds on the body of Atif Ameen are on the back side, in the region below the shoulders and at the back of the chest, which point to the fact that he was repeatedly shot from behind.
·     Another one (no.6 on the table) is on the inner side of the left thigh but suspiciously, the trajectory of the shot is in the upward direction, thus suggesting that in this case the shot was fired from below. What caused the unusually large wound of 5 x 2.2 cm? Why were metallic objects present in the left thigh?
2) 17-year-old Md Sajid also displayed at least two injuries (numbers 13 and 14, interscapular region and right leg), which had been caused by blunt force impact by object or surface.”  The gunshot injuries received by Sajid are as follows:
The entry points of each of these gunshot wounds—and the fact that all but one bullet is travelling in a downward direction—strongly suggests that he was held down by force (which also explain the injuries on the back and leg region), while bullets were pumped down his forehead, back and head.  (See also photo attached.)
In which genuine cross fire do people receive injuries only in the back and head region??
The all-important question is at why the NHRC deliberately ignored this incriminating and suggestive evidence? In its refusal to pursue any contrary line of investigation, it has proved itself to be in collusion with the Delhi Police, discarding even the minimum pretence of impartiality.
II
However, post mortem report is only one of the documents that been released by the NHRC to the appellant Afroze Alam. It includes, in addition, statements by senior police officers and a “Note on Investigation of the Serial Blasts at Delhi” (which became the basis for NHRC’s report and also the LG’s decision that no magisterial probe was required into the encounter’).
The Note on Investigation is high on allegations but cipher on any hard evidence. Some of the important point it makes to buttress its claims about Indian Mujaheddin and Atif Amin’s terror links are as follows:
1)      The cell phone number 9811004309 is shown to be at the heart of the investigations. According to the police, this number was in touch with three cell numbers from Gujarat, which were under surveillance by Gujarat Police following the Ahmedabad blasts (which took place on 26th July 2008). Further, this number was found to be present near Nizamuddin station on 21st July 2008, from where according to the police, ‘terrorists’ booked train tickets for Ahmedabad.
According to the police, the cell number belonged Md. Atif Amin and the police even lists how this cell number was switched off on 23rd September 2007 (UP court blasts).
However, by the police’s own admission in the Note, this number came to be acquired by Atif Amin on 11th August 2008 (much after UP court blasts and after Ahmedabad blasts and the supposed booking of train tickets at Nizamuddin station). Atif got this number as a post paid connection on 11th Aug and all the address details furnished by him were found to be true (that is how the police arrived at L-18 on 19th September 2008 in the first place).
So the only piece of evidence that the police had to nail down Atif Amin was his cell number, which he did not even possess at the time the Gujarat Police was tracking it. None of the material and evidence supposedly seized by the police has any procedural validity (The Note even fails to mention where most of the material has been seized from).
2)      The Note also mentions that immediately following the shootout, photographs of the “deceased Atif and Sajid were sent through Intelligence Agency (sic) to Afzal Usmani, who confirmed that they were indeed involved in the blasts. Recall that the ‘encounter’ took place on 19th September 2008, and the Annexure ‘A’ submitted by the police to the NHRC states that Usmani was arrested on 23rdSeptember 2008, full four days after the ‘encounter’. So when was Usmani arrested? When were the supposed confirmations made?
In light of these revelations and in the persistent refusal of the NHRC to take into account evidence which vitiates the Delhi Police claims that the ‘encounter’ was genuine, JTSA reiterates the demand for a judicial probe into the Batla House ‘encounter’. All those arguing that judicial probes are protracted and futile exercises are simple asking us to forget that two young men were killed under highly mysterious circumstances, and given that a separate FIR has not even been filed in the case of their killings, nor a magisterial probe conducted, as required under NHRC guidelines, a time bound judicial probe is the only solution.
Sd/
Manisha Sethi, Adeel Mehdi, Tanweer Fazal, Ahmed Sohaib, Ghazi Shahnawaz, Azra Razaak,. Farah Farooqi, Sanghamitra Misra, Anwar Alam, Arshad Alam, Shakeb Ahmed, Amarien Al qadar, Haris ul Haq and others…
:Jamia Teachers’ Solidarity Association
प्रस्तुतकर्ता नई पीढ़ी