AISA HOLDS PROTEST DEMONSTRATION AGAINST THE CANCELLATION OF ADMISSION OF 300 STUDENTS OF JAMIA MILLIA ISLAMIA! 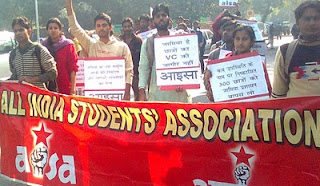 STUDENT COMMUNITY WILL INTENSIFY ITS MOVEMENT AGAINST THE JAMIA ADMINISTRTION IF THE OUSTED STUDENTS ARE NOT RE-INSTATED- AISA!!
AISA (All India Students’ Association) today, on the 14th of December 2010, has organized  a protest demonstration at Jantar Mantar against the admission cancellation of  300 JMI (Jamia Millia Islamia) students on account of short attendance . Dozens of Students from JMI, Delhi University, and JNU participated in this protest .This act by the Administration follows a pattern of the autocratic nature in which democratic voices and rights are being clamped down upon. The 300 students were not given any warning prior to the cancellation of admissions.
The Jamia students present in the protests underlined the loopholes in the current decision of JMI Administration, showing the irregularities in the attendance taken in the class. They also highlighted the manner in which JMI Administration is trying to shut all possibilities of students’ protests on this issue by hiring video-cameras to monitor activities of students, and creating an environment of virtual emergency through the hired “Bulls” of the Proctor Office.
AISA JMI Unit Secretary Sandipan said- “We demand that these 300 students must be readmitted and their exams rescheduled. If required, these 300 students will sign undertakings to complete the required percentage of attendance”.
Sucheta De from JNU-AISA stated that, “We must bravely fight this dictatorship of the JMI administration and lead the struggle for campus democracy.”
AISA DU SECRETARY Sunny criticized the “virtual emergency in Jamia campus.” He declared that “AISA must lead the movement to readmit these 300 students and the longer and far-reaching struggle for a democratic campus.”
AISA warned that if the ousted students are not taken back by the administration, then the student community will intensify  its movement against the current  JMI V.C. Najeeb Jung, and his lackeys. AISA also appealed to the teachers of JMI to come in support of the victimized students.
प्रस्तुतकर्ता नई पीढ़ी