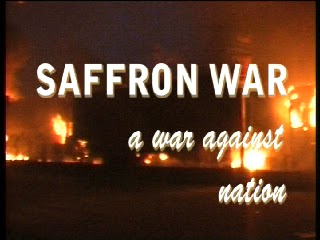 
Friends,
The hindutva politics conducted  from the Gorakhnath Peeth has been attacking the communal harmony of our state for a long time. The fascist ideology of this politics has its manifestations in some of the dreaded terror blasts in Malegaon, Samjhauta Express, Mecca masjid, Ajmer shrine etc. ‘‘Saffron War’’ is an attempt to understand & analyse the various social, religious, historical & political aspects of this phenomenon, which tends to convert this land of Buddha, Gorakh & Kabir into the battlefield to wage a war against secular India .You all are invited in this discussion.
Realesed by- Md Shoaib, Sandeep Pandey, S.R Darapuri, Arundhati Dhuru, Ambreesh Kumar, Siddhartha Kalhans, Randheer Singh ‘Suman’. Ekta Singh, Ravi Shekhar.
Cotact- 09415012666] 09415022722] 09307140390] 09369444528
प्रस्तुतकर्ता नई पीढ़ी